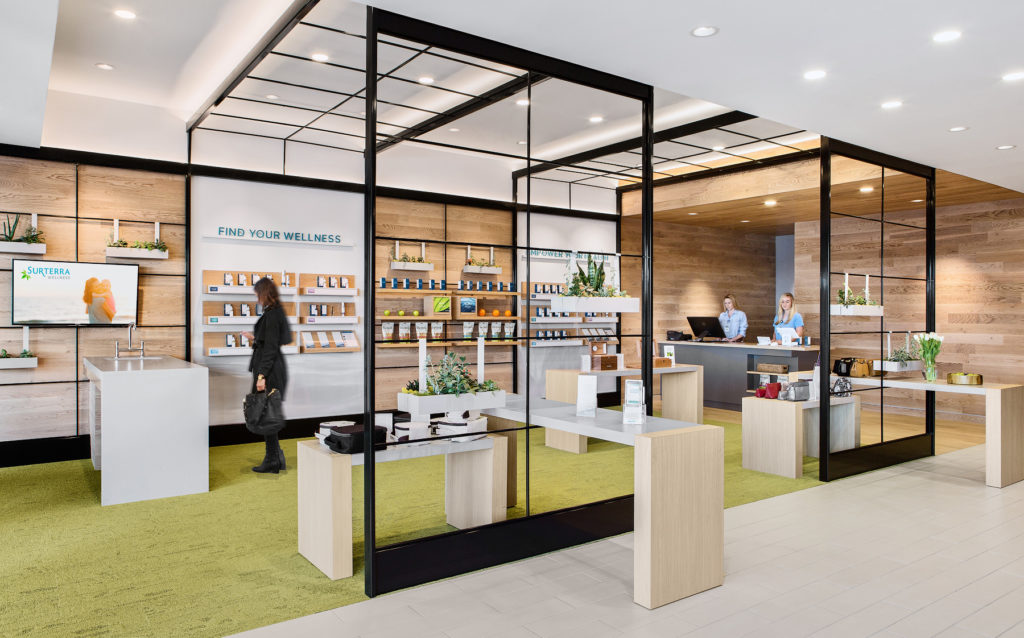 You can read the article below, and on Marijuana Venture here.

It’s impossible not to notice the kitchen when you first walk into Surterra’s Tampa, Florida dispensary.

Complete with an island, a sink, cabinets and a coffee maker, the store immediately puts shoppers into a frame of mind that conjures up the home, hearth and comfortable family gatherings.

And that’s entirely on purpose.

“The goal was to capture the warmth and welcoming atmosphere of a home, a kitchen, a dining space,” says Mardi Najafi, director of retail for Figure3, the Toronto firm that designed the Florida dispensary.

Figure3 employs an unusual design process it calls “Connection Point” that uses cognitive and behavioral science research to better understand client goals and design spaces to help clients connect with customers. The process gives the designers “frames” from which to work in order to evoke certain subconscious feelings from shoppers.

In the case of Surterra’s medical marijuana dispensary, Figure3 hoped to conjure feelings of compassion, nature, connection and balance. Figure3 landed on a “natural, healthy and organic food” metaphor for medical marijuana and worked to bring out those emotions through its design.

The kitchen turned out to be exactly the type of non-intimidating environment that Surterra was looking for.

“At the end of the day, we’re a health and wellness company,” says Nick Monette, vice president of real estate for Surterra. “And we know people like to have conversations in the kitchen.”

Surterra was founded in 2014, won its first Florida license in 2015 and opened the 5,000-square-foot Tampa store, its first, in September 2016. Today, the vertically integrated company owns 15 retail outlets and a 300,000-square-foot cultivation facility in the Sunshine State, as well as a small cultivation facility in Texas. It also recently announced a partnership The Apothecary Shoppe, a vertically integrated company in Las Vegas, giving Surterra a foothold in Nevada as well.

Based out of Atlanta, the company employs 550 people.

Every Surterra dispensary built since the Tampa shop has included elements from Figure3’s design, which was featured in Newsweek magazine in 2017.

“I’m incredibly proud of our design,” Monette says, adding that he thinks other dispensaries in the state are trying to emulate Surterra’s design principles.

And all of that developed through Figure3’s Connection Point procedure.

“It helps us understand the people we design for at a deep level,” Gilchrist says.

According to Gilchrist, people can’t always articulate what exactly they want for the design so Figure3 uses different methods to overcome the “psychological constraints” and determine what the clients hope to achieve. The design firm uses hour-long, one-on-one sessions to try to pull out “metaphorical thinking” to get at what the client wants. Then, Figure3 tries to elicit that in its design.

In the case of Surterra, the target audience is “caregivers” and the design team hoped to evoke a “frame” that was food-based. According to Figure3’s research, in fact, “wholesome, natural food” rose to the top of the positive frames and helped shape the entire design.

The information was passed on to Najafi and his design team to create a foundation for the “high-level, conceptual directions.” With that in mind, the kitchen island became a focal point for the shop, designed to evoke happy memories of time spent over meals with friends and family. Surterra uses the space for informal consultations to make customers feel comfortable. Even the colors — woods and light blues — were chosen to remind shoppers of the “familiar triggers of a home.” Around the corner is a more private consultation space the firm calls “the dining room.”

According to Monette, the whole Connection Point process was a “very collaborative experience” that helped create the non-intimidating environment Surterra wanted to create. 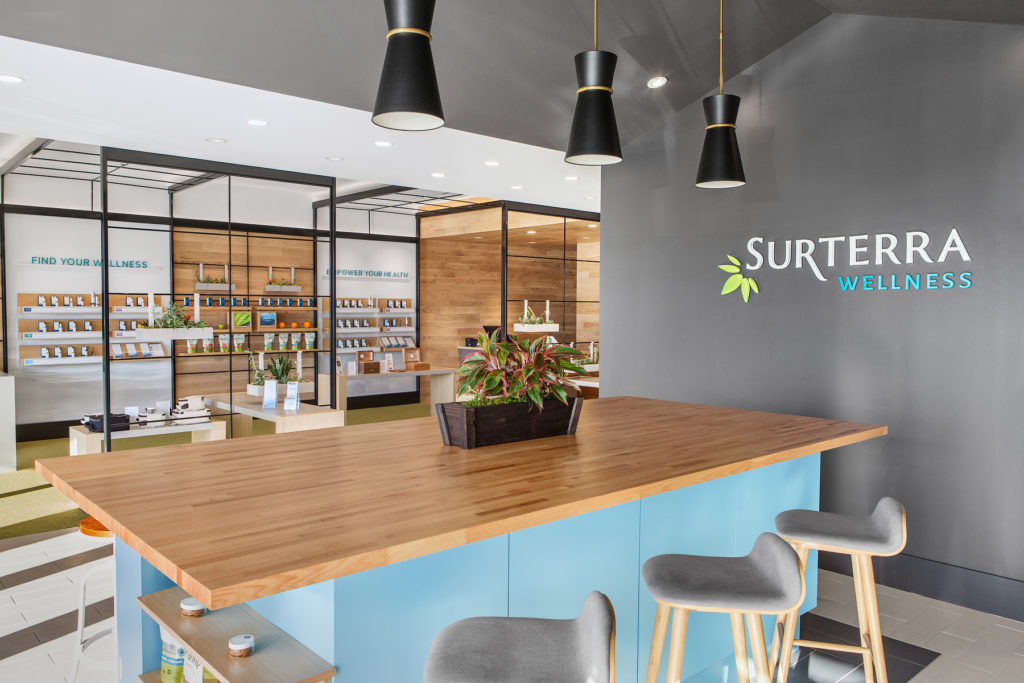 Across from the kitchen, the design frame switches. Instead of evoking the conversations around a table, the product display area of the store is called “the garden.” It is separated by stylish glass panes designed to resemble a greenhouse, with trellis displays, natural paneling and green carpet.

“The whole idea is to walk into the garden and test the garden-style products on display,” Najafi says.

However, unlike some other dispensaries, the products on display are not active, but dummy products that are similar. For example, there is no flower and the topicals on display are simply non-infused lotions that give sales associates the opportunity to show customers how to use a product and how much of it they may need.

“People need to experiment,” Gilchrist says. “That goes so far in triggering the kind of experience people can have with this space.”

According to Monette, that too was exactly what the company hoped for in the dispensary.

“What we wanted to do was have a natural, open and inviting retail environment,” Monette says about the design discussions from Surterra’s perspective, adding that the company hoped to have cannabis perceived “as a supplement.”

As important as it is to create positive mental images and frames, it is equally important not to evoke negative ones. Gilchrist says shoppers use what is called “embodied simulation” and unconsciously try to simulate what the experience is like in any given shopping environment and compare it to their previous experiences in other stores.

In the case of a medical marijuana dispensary like Surterra, it was important to evoke the food and natural frames, but equally as important to avoid any “illicit” frames. That meant as much transparency and openness as possible, not only inside the store, but at the storefront as well.

For example, the shop’s windows are not frosted and because it doesn’t have “live” product on the sales floor, even people without medical marijuana cards are able to come into the store and look around.

The designers also worked to avoid a “money” frame, keeping the focus on a consultation-based experience instead of a transactional one. Even the ATMs — which are necessary because marijuana is mostly a cash-only business — are hidden from view, as are cash drawers.

In a similar vein, the store’s security cameras are all also there — as required — but generally out of sight of customers.

From the shop’s perspective, the design has been an unqualified success and helps set Surterra apart from other dispensaries in the state.

“I think that Surterra did a really good job early at setting a high bar for the standard of retail in Florida,” Monette says.

Gilchrist says making sure to overcome all of the preconceived notions of a marijuana dispensary, like dumb jokes about stoners, was part of the point of Figure3’s research and work. Even common ideas about marijuana retail design, such as modeling dispensaries after Apple stores, are often wrong.

“That’s the worst possible approach,” Gilchrist says, based on the firm’s research.

However, while everyone was excited with the work done for Surterra, both Gilchrist and Najafi emphasize that everything they did was based off the research they conducted. The Connection Point process would most likely create a completely different shop for a recreational environment with a different target audience in mind, they say.

“We could do a similar study elsewhere and it would manifest differently,” Gilchrist explains.

The firm’s next projects, for example, may be recreational stores in Canada, which just legalized recreational marijuana. Those shops will probably look nothing like the Florida medical dispensary they created for Suterra.

“Everything in this design was based on the outcome of the Connection Point,” Najafi says.